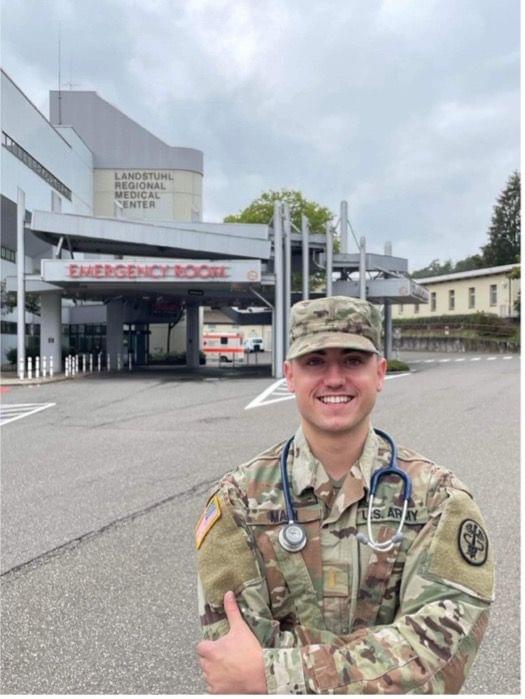 From The Christ College to Germany, Elliot Main (Class of 2021) Delivers Care in the Largest Military Hospital Outside the Continental U.S.

Elliot Main knew he wanted to become a nurse as a senior at Batesville High School and chose The Christ College as his first-choice institution. Coupling his love for nursing and serving his county, Elliot found a way to marry his two passions into a career that has enriched his professional and personal life on a global scale!

As a freshman at The Christ College, Elliot decided to become an Army Officer, completing Reserve Officer’s Training Corps (ROTC) and Basic Officer Leaders Course (BOLC) after graduating with his BSN. A catalyst to solidifying his love of both, Elliot tells us, “My cohort learned how to integrate nursing with the Army profession, setting up “battlefield medicine,” how to send/receive flights from Blackhawks, how to work in and command a field hospital.” From that experience, Elliot ventured across the globe, landing at Landstuhl Regional Medical Center (LRMC) in Landstuhl, Germany, a 100-bed Level II Trauma Center serving all of Asia, Africa, and Europe, approximately 55,000 Americans living in and around Germany.”

Miles from his Indiana home, Elliot has found living and working overseas as an Army Nurse fulfilling, and he credits his education at TCC for giving him the foundation to grow and practice with confidence: “Thanks to my incredible professors and instructors, my education at TCC provided me the necessary tools to excel in my nursing practice here at LRMC.” Delivering care to active-duty service members and their dependents, deployed soldiers, and American retirees and veterans, Elliot cares for a variety of cases on the med-surg and pediatric floors. Apart from ICU and maternity, Elliot sees everything from 2 weeks post-partum until end of life, including joint replacements, spine surgery, end-stage cancer, palliative care, and heart and renal failure. Elliot says, “Working on this floor has broadened my scope of practice and knowledge base considerably.”

Embracing his professional growth, Elliot recently led his Clinical Nursing Transition Program (CNTP) in completing an Evidence-Based Practice project focused on patient-centric, multimodal discharge education, and patient satisfaction scores and will be presenting that EBP project at the Regional Health Command Europe MEDSurg Conference in Garmisch, Germany this fall! He, along with fellow Second Lieutenant Durant, will be the only Lieutenants presenting alongside Majors, Lieutenant Colonels, and Colonels.

In addition to his nursing duties, which also include mentoring new RNs and educating staff, Elliot proudly upholds his Army duties. Recently he led a team that placed 2nd at a LRMC CrossFit competition and is currently training to compete for the Expert Field Medical Badge in Vicenza, Italy! He is an avid traveler, visiting 7 countries and countless cities since moving to Germany. He tells us, “Using my nursing degree in the U.S. Army gave the unique opportunity to be stationed in Europe, opening doors for different cultures, foods, cities etc., and has expanded my connections, both personal and professional, throughout the globe - Korea, Brazil, Iceland, Australia, Italy, etc. I can’t thank those at TCCNHS enough for setting me up for great success!”

We thank Elliot for his dedication to the nursing profession and our country. We know wherever he goes, here or abroad, Elliot will bring an energy and determination to care for those who currently serve or have served our country, and for that The Christ College could not be prouder!

The Christ College can get you there.